The Erosion of Winter

Now I'm a huge fan of warm weather, but this recent episode of summer temperatures in February makes me realize that I can only enjoy the heat at seasonally appropriate times. The weather we are experiencing this year is emblematic of recent climate change: Pepperwood's paper Downscaling Future Climate Projections to the Watershed Scale (published in December) included measurements of recent climate change here in the Bay Area in addition to projections through the end of the century. It's so important for people to realize the process of changing our climate greenhouse via gas emissions is well underway, and that in the Bay Area the majority of impact has been felt in a warming trend during the winter (amounting to an increase on average approximately 3°F during the winter season). In terms of the water cycle, this year we experienced two significant floods, yet we find ourselves at risk of a drought if the rest of the spring is as warm and as dry as the last couple weeks. This pattern of episodic storms punctuated by extended dry periods, as our recent study suggests, may become more frequent for our hydrologic cycle in years to come-as our winter season "shrinks."

Last night I saw an amazing movie called Chasing Ice which showcased the Herculean efforts of geomorphologist turned photographer James Balog and his Extreme Ice Survey team to visually document the accelerated retreat of glaciers around the globe. By planting Nikon cameras in armored metal cases (equipped with power and a customized computer to store multiple images) in some of the least hospitable spots on the planet, Balog's team is using time-lapse photography to create real-time animations of the conversion of water stored in our ice-caps to unbelievably massive rivers of freshwater pouring into the oceans. In one image, a terrain of ice the size of lower Manhattan ruptures, rotates, rumbles its way into the sea: images like this have never before been witnessed by human eyes.  Trained as an Earth scientist, Balog shared that he, much like myself, was something of a climate skeptic 20 years ago because it was so unfathomable to him that humans could transform our atmosphere and in turn rates of geological change on the planet. At that time climate change was still largely only suggested via computer models, but for Balog and other like-minded empiricists, witnessing old man glacier retreat at rates thousands of times faster than ever recorded in geologic history now provides undeniable evidence of the domino effect now unwinding around the globe. 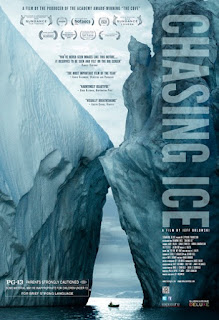 Projects like the Extreme Ice Survey only recently become a possibility due to advances in sensor technology. Watching Balog's team tackle the task of distributing cameras along the icy edges of Alaska, Greenland, and Iceland reminds me of our own staff and stewards' dedication to mounting cameras and sensors around the preserve-albeit in much more welcoming conditions (even poison oak looks preferable to frostbite)! Now that these technologies, including motion-activated cameras and compact data loggers, have come within economic reach of conservation organizations, the field is exploding. And one of the reasons I feel it is so important is that it takes science and creates images that people from all different kinds of backgrounds can understand. There is a huge difference in trying to communicate this information using a color-coded map, or worse, an Excel graph, versus an actual moving image that people can relate to. Given the topic of climate change has been riddled with debate, albeit much of it manufactured, presenting incontrovertible evidence of the impact on the globe and to our local environments today is now critical in order to inspire people to take action now.

Until working on the recent paper with our Terrestrial Biodiversity Climate Change Collaborative, I had not given much consideration to the impact of shorter and warmer winters on the North Bay. In the process of presenting our findings to the community, I learn from farmers and other naturalists about the value of winter, nature's deep sleep, in building and storing resources that support our ecosystems. First of all, frost is an extremely important control on outbreaks of insect pests. From the perspective of soil microbes, the wet winter season is a busy time of converting minerals in the soil into forms that plants enjoy the rest of the season. With a shorter winter wet season, organisms in the soil have less time to do this important job. Hydrologically, in order to accumulate moisture in the soil and our groundwater aquifers, the longer the wet season the better. And of course the earlier the spring bloom, the more resources plants will have to put into reproduction and survival through the dry season, with risk of later spring frosts damaging seeds and blossoms. By next year we hope to initiate protocols from the California Phenology Network to empower Pepperwood's citizen scientists to track the impact of our changing weather on the lifecycle of our local plants. The sooner we tune into the subtle changes as they happen, the sooner we can shape adaptation strategies to our native biodiversity throughout the region!
Posted by Unknown at 12:54 PM

Email ThisBlogThis!Share to TwitterShare to FacebookShare to Pinterest
Labels: Science