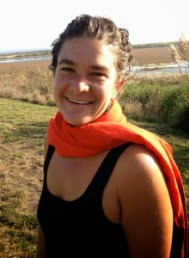 How did you get into bird language and tracking?
I have been formally involved in ecology, conservation and environmental public outreach since my studies at UC Santa Cruz in 1993, but my passion for the land and its natural history began long before that. When growing up my childhood gang took trails that wandered over fences, along tree branches, and through vacant lots. We rarely used roads or sidewalks, preferring the secretive places in between. Now as I dedicate my work to wildlife corridors and wilderness linkages, I see that these interstitial spaces - these kid spaces between human structures - connected the wild places of our neighborhood to the wild things within us.

Are there common techniques used by trackers in Northern California? How much of what you teach can be applied outside of California?
My tracking journey has taken me all over the country and the globe. From 2005-2010  I dedicated my time to tracking and writing. During these years, I drove around the country in my truck and would pull into a town and find out where the trackers and old timers were. It was via these trips that I learned many different tracking techniques that are not unique to Northern California or even just California, but really common everywhere I went. I also traveled to Mexico and Brazil to learn from people living down there, and I lived in South Africa two different times specifically for the purpose of learning to track. I feel that tracking techniques are wide ranging and can be used in many different areas. It is one's sense of place or ecological knowledge of an area that creates specificities in tracking. The same species often has different behaviors in a different habitat, and that is where knowledge of place is essential in differentiating the track and sign one is seeing. 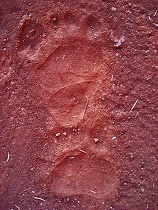 I see you teach tracking classes just for women. Can you share a little more about this?
Most of my teachers and mentors have been men, for whom I am unbelievably thankful for. But in 2006 I had the opportunity to track with a group of women at Women's Tracking Gathering in the Berkshires, hosted by Lorene Wapotich. It was then that I had insight to a different kind of tracking experience. When women track they tend to be more collaborative and less competitive in their analysis of a track. The answer becomes less important and the questions and story become the focus. This is not to say that I have not tracked with men who will question the same, but generally, especially when the group is predominantly men, which is often, the intention of tracking changes. I have deep appreciation for my experience with tracking with both men and women, as they have developed different sides of my own tracking knowledge.  Lastly, the tracking world is largely dominated by men, perhaps a result from the hunting world. (And I do believe this imbalance is shifting in the past few years.) Given this imbalance, women can be intimidated to ask questions or speak their thoughts, or explore freely. An all women tracking conference gives women the freedom to explore tracking and then have more confidence when they are in co-ed classes.

I am working on running a co-ed tracking conference in the next few years.

What skills can participants expect to walk away with from your bird language and tracking class?
Participants will learn to recognize  patterns of basic bird behavior which reveal clues of the relationships animals have with each other and the landscape. They will learn to recognize baseline and alarm calls. In addition participants will learn basic track and sign patterns, such as discerning the difference between feline, wild canine, domestic dog, and other animal families. Participants will also learn to tune into their senses, giving them greater awareness of their surroundings both at Pepperwood and in their own backyard. In addition we will discuss perceptions that tracking can open up in individuals who develop a regular tracking practice.

Can you share one of your most memorable tracking experiences?
There are many many stories of the land and animals that I can share, but the one that is coming to mind know, is from an experience of tracking in the chaparral of southern California. Not long before this moment I had learned that coyotes often use their voices, yips, yowls, howls to create terror in their prey so that they will run from the sound, but the sound is so pervasive, the prey cannot discern where the sound is coming from. This disorientation gives the coyotes an advantage to capturing their quarry. Well, on this day I had been on a coyote trail that snaked down low and in and out of ceanothus thickets. Most of the hour I was on my hands and knees moving like a coyote on these single track trails. At one point I decided to sit still and watch and listen. Perhaps 20 minutes into this sit, the coyotes began to yip and yowl. At first it was just a few bursts here and there, and then the cacophony escalated. Though I could not discern which direction the howls were coming from I was surrounded by a swirling vortex of sound. Intellectually I knew the coyotes were not hunting me, but different prey in my vicinity, but instinctually, my animal body was telling me to get the hell out of there, yet I had no idea which way to go. My impulse was to move whichever way to get out of the noise. In that moment I was in the eye and body of the prey animal and completely understood how rabbits were often lured into the trap of the coyotes' song.

Have you ever been tracking an animal and surprised it? 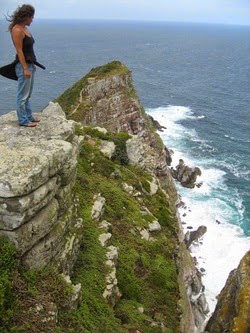 Yes, there have been several instances where I have come upon an animal and surprised it. Sometimes it is because I am intentionally searching for that animal and sometimes it is because we happen to be moving in the same habitat doing our own thing and bump into each other. Regardless of my intention, the times in which I come upon animals without them knowing that I am there first are completely dependent on my own mental state. If I am busy in my head and not in my body, that mind chatter usually alerts animals of my presence much sooner than my physical presence. In school we are traditionally trained that we have 5 senses. But as I continue my journey in tracking I feel certain that our sensory awaness extends far beyond these 5 common senses. And of course that does not include the multitude of ways that animals perceive the world. It is these additional senses that are often the cues and alarms that alert the animals to my presence. If my mind is louder than usually the animals hear me, even if my movements are quiet.

Anything else you would like to add?
While I deeply believe that tracking is a practical applied skill, tracking has also become a paradigm through which I view the world. Tracking extends far beyond the realms of only foot prints and sign. People track everyday. They chart the weather, water flow, seasonal plant growth.  Teachers track their students. Parents track their child's development. Via tracking people can drop into a sensory awareness that can inform them of the patterns occurring around them each day whether they are in the wilderness, at home or in the city.

Bird Language and Animal Tracking:
Reading the Signs of a Landscape
Saturday, November 7 at 9am through
Sunday, November 8, 2015, at 3pm

For more information about more of Meghan's upcoming classes, visit her website here.